My Daughter is Amazing and Other Dyslexia Truths 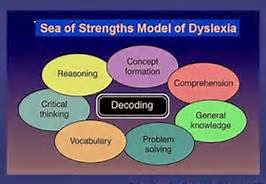 As the mom of a dyslexic, struggling reader, I make time for articles and books about her condition, partially to understand her needs, but also to manage my level of concern. Many of us, before researching, thought dyslexia was a condition in which the letters and words wouldn't stay put on a page, and consequently, reading was a slow process for the affected student. This is a gross misrepresentation of what dyslexia is, and this lack of understanding in the general public is unfortunate, given that an estimated 1 in 5 people are affected by dyslexia to some extent.

Robert Redford's grandson is severely dyslexic and could barely read and write at 10 years old. The young boy's father, James, was so frustrated about the misunderstanding surrounding his son's condition that he produced The Big Picture, a 2013 documentary which "follows the stories of several dyslexics of different ages, including son Dylan, and examines how people with the condition cope from a young age right through to adulthood." Below is a quote from The Guardian story about the documentary:


Yet the condition is still shrouded in mystery. When Dylan was a child, his parents "felt under fire all the time with misinformation". They encountered teachers who did not know how to deal with their son and people who assumed it was a "made-up" illness that children could grow out of.
"You get a mournful glance from someone who says, 'So, will they be living with you for the rest of your life?' " Redford says. "Or, 'I'm so sorry. Do you plan to have more children?' It's just crazy. That was part of the frustration and it drove me to tell the story as it really is."
The Big Picture explores some of the recent scientific research around dyslexia which has used brain imaging to demonstrate that shrinkage in the arcuate fasciculus, the part of the brain that processes word sounds and language, could be one of the condition's contributory factors.
Once Dylan was officially diagnosed, he started to thrive and won a place to study at Middlebury College, a prestigious liberal arts university in Vermont. Redford says that his son, like many dyslexics, is "a big-picture thinker" who can come up with creative solutions to problems but that mainstream schooling in the US and the UK fails to recognise this.

What exactly is dyslexia? The International Dyslexia Association defines it thus: It is characterized by difficulties with accurate and /or fluent word recognition and by poor spelling and decoding abilities. These difficulties typically result from a deficit in the phonological component of language that is often unexpected in relation to other cognitive abilities and the provision of effective classroom instruction. Secondary consequences may include problems in reading comprehension and reduced reading experience that can impede growth of vocabulary and background knowledge.

Even though my daughter, who will be 8 in December, has been sounding out words for well over two years now, she still struggles mightily with fluency. Dyslexics just read slower than average, and this will persist their whole lives.

John Piper, renowned pastor and co-developer of the wildly successful Desiring God website, admits that he has dyslexia and that consequently, he's not a well-read person, owing to the excessive time it takes to get through books.

And yet he's a brilliant theologian and communicator, and has written or co-written nearly 100 books.

What does he read then, that cultivated his great mind? The Bible. He picked one book--the right book--and became an expert on it. I can't tell you how his story and many others inspire me as I work with my daughter.

Dyslexia can be a gift; see an article by the author of Overcoming Dyslexia, Sally Shaywitz, M.D. entitled "The Dyslexia Paradox: Slow Reading, Fast Thinking", published in Yale Scientific. Dyslexics are the perfect entrepreneurs because they see possibilities and connections most of us don't. They quickly see the big picture and the possibilities, but are often bogged down by details. Scores of famous people have dyslexia.

Sally Gardner, a famous writer (one I haven't read), wrote an article for The Guardian entitled Dyslexia is Not a Disability--It's a Gift. In the comments section many disagreed with her because of their negative school experiences, and because of the stress having dyslexia caused them. It seemed to me that those who felt it was a gift were those who benefited from parents, teachers, peers and friends who believed in them.

My daughter is an amazing young lady and I do, indeed, believe in her, but sometimes I wonder what the narrow-minded world will do to her psyche. Without belief in God and an awe of all that He created, it's easy to be narrow-minded and think "inside the box", expecting everyone to conform to the establishment. Atheists think our silly Jesus is a stupid myth, or at best, just a famous person, and that our Jesus-freak minds are too narrow or brainwashed to view him otherwise.

But doesn't it make more sense that a narrow mind is one who looks at all the beauty and diversity in the world, and the complexities of the human body, and concludes it's all an accident? That is narrow.

Just today my daughter's story included the word bike, among many other silent-e words. Each time she encountered the word, she had to sound it out. Not once did she recognize it from context or from having read it many times in the story. It's so hard not to think silently: enough already! You read this ten times in the last fifteen minutes!

It's hard not to worry about her during her reading sessions and afterwards. Reading anything other than word. by. word. is such a struggle. My dyslexia-reading and research help me, mostly by leading me back to my core values and beliefs.

God is good. He loves us and we are fearfully and wonderfully made...all of us differently.

I have two children, Peter and Mary, who think outside the box and exhibit disabilities that are also gifts. ADHD people, as well, are highly represented among the entrepreneurial population. The biggest question for me as a parent and teacher is this: Where is my faith? In whom? Is it in God, or in traditional education? In God, or in the world's definition of success? Is it in how others perceive me and my family, or is it in God? Is it in my plan or perceptions, or is it in God's?

Science and research and personal stories are helpful, but the Truth of the Bible is my life line. I will continue trying to understand my daughter and my son, but all the while, I will cling to the promises in the Word, remembering that perfect love casts out fear, and we are all wonderfully made, with purpose and a plan.

The more we focus on God's plan and not our own, the wider and more beautiful our view.

Posted by Christine at 3:09 AM