Hope When You Have OCD 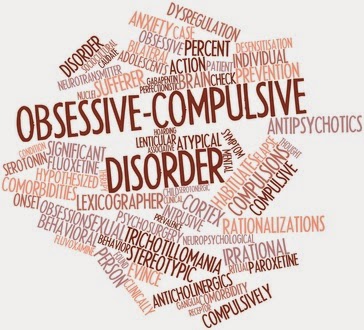 Some of you know that I have a son with OCD--Obsessive Compulsive Disorder. His paternal cousin also has it, as well as a maternal uncle. Many people who have ADHD also have OCD, or some other anxiety-related disorder.

What you may not know is that Obsessive Compulsive Disorder can become so debilitating that sufferers sometimes stop leaving their homes altogether. Some develop offshoot disorders, such as body dysmorphic disorder, or anorexia disorder, and either commit suicide or starve themselves to death. These outcomes are not common, but they are chilling possibilities, and if you parent children with OCD, you'd better know the signs. I have one son with moderate OCD with the potential to become severe, another son with mild OCD, and a daughter just developing OCD.

One very disturbing thing is the cost of good care, and this is true for any mental disorder. Poor or mediocre care can make OCD worse. Exposure Response Prevention--the best OCD therapy there is--is a treatment plan in which an OCD sufferer is exposed to what they most fear, such as germs. Paul fears germs but this is only mildly the case for Peter. Each sufferer is different.

The range of things feared by OCD sufferers is vast. A fear of germs may seem like the most typical to the uneducated public, as it's the OCD fear most characterized in movies, but this disorder goes way beyond excessive use of hand sanitizer. Every time my older son sees a girl in shortish shorts, he fears he will attack her, despite the fact he is non-violent. Fear of attacking someone is a common OCD fear for one reason or another, even though OCD sufferers are non-violent people. One can understand how it is that some never leave their homes, if they've never received proper therapy and OCD is allowed to run its ugly course. It's a progressive disorder.

For Christian sufferers exposure response therapy can be especially difficult. Peter will have to look at ladies in shorts and not perform the ritual (asking me for reassurance that he won't attack the person), in order to see shorts-clad ladies in public and not have an anxiety-ridden response.

There's a neighborhood girl, Lexie (some may remember her?), who comes in short shorts and she is a living exposure-response tool we will have to reluctantly use. Peter panics the minute she walks down the street presently. To say her visits are stressful is putting it mildly. She has just started coming back because Peter got into trouble and couldn't have visitors of his own--although she plays with all four of my kids--for a few months.

As a mother, her outfits have always bothered me (tight, short, etc.), but we try to disciple her and talking about proper dress is no way to disciple someone who may not even be saved. Even the Holy Spirit probably doesn't approach dress until many other things are taken care of in the heart first. Many a young Christian has been hurt by someone who talks about dress too soon, and there are no solid "rules" about dress anyway, so it's a very delicate topic.

Peter has read verses in Scripture that conflict with looking at the flesh, and he is already embattled about it, and of course I am heartbroken about it all.

OCD never goes away; there is no cure. The anxiety will always be there, but a person can be taught to ignore the voice--to never perform a ritual in response to it. As soon as life becomes unduly stressful and a sufferer becomes weak again and succumbs to the rituals, the whole cycle starts again. So the key is to pray, exercise, learn to manage stress, live a routine life as much as possible, and take meds on time.

The more I read about OCD, the more I realize that only the rich have the greatest hope of beating this disorder. But, it does take courage, as well as a skilled, experienced clinician. Without the resources for the best care, Peter, my son, must rely on God to give him the courage and wisdom to fight this. We have educated ourselves and he knows what to do. He just has to force himself--with God's help--to take the very frightening steps. Part of that is letting go of the bitterness--that he must suffer from such a disorder to begin with. He has to accept with an open hand what God gives, so he can trust God completely, even in this ugly disorder, and draw strength from Him.

God is bigger than OCD. He is bigger than the healthcare system. My son has this so that God's glory will shine through his weakness. I pray that my son will grow to see this as a privilege, and that his spirit will rest in that. A tall order for a 12 year old, but not impossible.

To the rest of us not performing these rituals doesn't seem so terrifying, but to those with OCD--especially to the children who have it--it's extremely terrifying.

Here is the testimony of a 33-year-old man who has mostly beaten the disorder, after successfully completing Exposure Response Prevention Therapy. He saves the meat of his recovery talk for this year's International OCD Foundation Conference, but you catch a glimpse of the road he's walked.

Ethan S. Smith Throughout my 20’s, even though I found success as an actor, I lived a double life. I experienced constant fear and anxiety. I couldn’t do most things normal twentysomethings did. I couldn’t even leave the city without my mother or father being with me. I lived inside a box that grew smaller with every passing hour, unable to pursue my dreams. I was a prisoner in my own brain.

By the time I was 32, despite seeing numerous therapists over decades that thought they knew how to treat OCD, yet had never even heard of ERP, I found myself bedridden in my parent’s guest room. I was too scared to eat, too scared to drink, lost 100lbs, and was barely existing. I would lie on top of my hands 24/7 because I was afraid I was going to accidentally hurt myself. Finally, after getting three CT scans in three days at three different hospitals to be certain I didn’t have a brain injury from thinking I hit my head, my parents caught on that I was ritualizing and then physically prevented me from doing so. Without the ability to ritualize, and no proper therapy or coping skills under my belt, I convinced myself I was going to die and I became completely out of control. What I was experiencing was definitely a far cry from the OCD that the media likes to portray as “quirky” or “adorable.: This was an OCD that so many parents, family, and friends know too well within the confines of their homes.

Now here’s the really cool part. That “big dream” I was talking about earlier finally became a reality only three years ago when I was 33 years old. Today, I’m a 36-year-old writer, director, producer, and actor living thousands of miles away from my parents in Los Angeles, California. So what happened during that year and a half that changed my life forever? That’s what I can’t wait to share with you at the OCD Conference — and not just what happened but how it happened, because therein lies the key.

I’m not going to tell you that I don’t ever struggle now, because that’s not the truth. OCD is a disorder I will carry with me until the end. Some days, weeks, months I forget I have it, and other times it screams at me so loud I jump. The difference in my life now is that in either case, my actions are the same — I choose living a life where OCD has no say, no weight, pull, push, or power. I acknowledge its existence, but that’s where our relationship ends.

Words cannot describe how moved and elated I am to share my story with all of you at the Annual OCD Conference next month. To show you actual video footage of me when OCD was at it’s worst, and share with you the tools that helped me turn my life around. Most importantly, I look forward to meeting all of you, because we all have our stories of pain and suffering — some of us are still suffering, and some of us are on the other side of the war. In the end, we all share a common goal: to make life not about OCD but about living, and even enjoying it in the process.
Posted by Christine at 11:03 AM

Thank you for sharing this. I will be praying for you as you guide and help your son. I have been writing about courage, praying that you will have courage.